Magnus watched as he saw the Grimstone wizards begin to make their way into the house. In the house, they were met with several automations. One of them was a robotic owl-like being which had shot out bursts of winds from its mechanical wings. The leader of the wizards rose his hands -summoning his own automata. A summoning circle appeared next to him as the automata summoned flew from it at high speeds.

This new automaton resembled a english knight with everything mostly black and a red visor. There was slight rust at the edges of each section of its armor as one of the wizards boasted. “This is a one hundred thousand year old automata. It has fought against the mightiest of warriors. It is said that “nothing may stand before the blade -not even God himself”

In a moment of arrogance, the wizard had given vital information to Magnus’s father, Nicholas, who had been listening nearby. His eyes lit up in a similar way to Magnus when he found an opening. The hallway that the invaders were in seemingly had crimson cracks  beginning to form in them. The one of them knew what branch of magic this was. He was astounded that the seemingly frail Griswold family was capable of counter-magic.

Magnus had a tear of happiness on his face -forgetting that his parents don’t come out alive. But it didn’t matter to him. To him, he was proud of his father. But he knew that there was no way he could defeat the men. The lead wizard, Antonio, shouted out a command, “Everyone. Releases magical pulses.” Magical pulses were effective in countering counter magic as there was no structure in pure magical energy manipulation to focus on and it destabilized the structure of counter magic.

He had looked at his father expecting to see tears or regret on his face. Magnus was shocked by the expression on his face. Nicholas had a wide smile on his face. The crimson cracks stopped and dispersed at each mage. A loud shriek could be heard as everyone turned to the knight automata. Crimson lines had crawled from the ground to its body as Nicholas had “hacked” the automata allowing him to control it.

Magnus was shocked by his fathers plan. He had made the mages think that he was attempting to hack into their sources of mana. Rather than accomplish something far out of his league, he decided to hack into the automaton which would be in an easier position to hack as the owner was sending out pulses of magic which was ruining the connection. The automaton was ready for its new orders. “Command: Attack” Magnus’s father whispers, causing the automaton to strike at the mage closest to it. In the mages defense, he tried to defend with a basic barrier spell but the blade that the knight wield was full of anti-magical energies.

“How is he doing this?! The Griswolds shouldn’t have enough magic to do anything remotely like this” One of the wizards exclaims confused. One of the other mages looked around and saw the walls glowing with several norse runes. Her eyes glew with a shade of blue which was a sign that Magic Sight was active. This allowed her to see the particles of mana in the air. She saw particles of mana flew from her and her group to Nicholas.

She snarled and exclaimed. “The runes! He set up a bounded field which drained our magic-” She was promptly interrupted from saying more by the blade which was now in her mouth. The other mages understood what she was trying to say and some of them worked to take down the runes. Nicholas realised something however. The automaton was draining much of his magical energy when it was supposed to be autonomous from any outside source of magic.

Magnus had realized what it was at the same time his father did. His Magical Formulation showed that it wasn’t an actual automaton. Rather it was a conjuration made up of magical energy. That meant that the gain that he was gaining from the mana absorption runes were equalized by the cost of maintaining the conjuration. Thus, he simply let it dissipate rather than drain even more mana.

Antonio smiled as almost everything was going according to plan. He knew that the Grimstones had a high amount of skill in bounded fields and it would be logical to add a draining one due to their disadvantage. He also knew that Nicholas in particular was excellent at what was dubbed Magical Hacking. A form of magic that Nicholas had developed himself. He would know better than to try and hack into several powerful mage’s mana sources. Thus he created the conjuration and had one of his team members gloat about it to catch Nicholas’s interest.

Magnus could see Nicholas scowl as he began to run across the small mansion. The invaders gave chase with Antonio summoning a personal familiar of his named Yami. Yami was a swirling mess of shadows and darkness. This mess of shadows and darkness was embedded with several eyes of a magical beast. One could see the huge forest,green eyes of a giant and the small eyes of a beautiful fairy. Yami snarled as Antonio said. “ Search for the Light”. Immediately, Yami spread its body into tendrils which bounced across the hallway using different shadows to expand its maximum reach. Everyone near its tendrils could see how it seemingly drank away from the light around it and could feel how it would vibrate through the air.

(Similar to this but only the shadow/darkness bit) 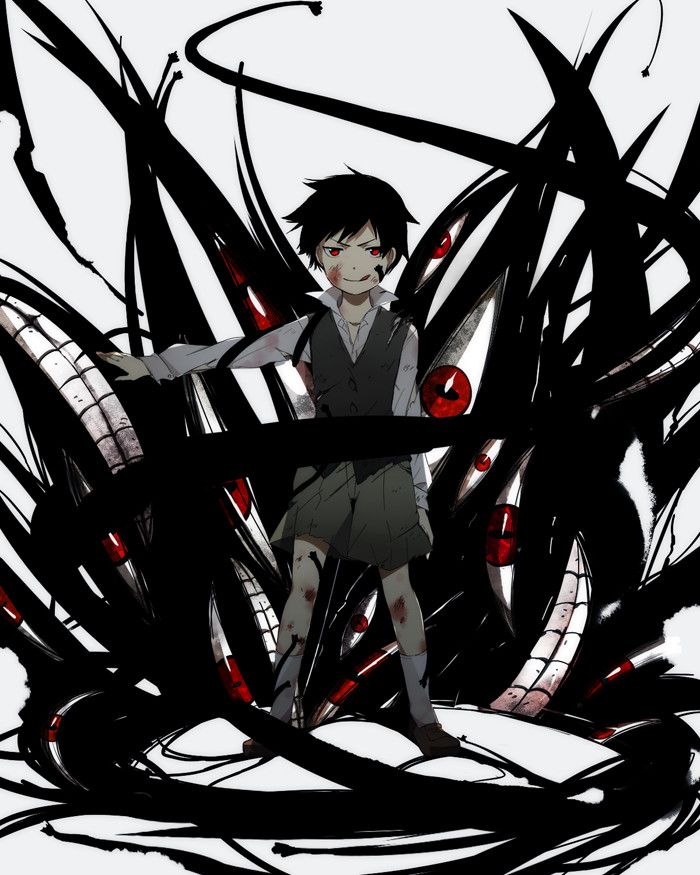 Nicholas grunted as he saw the tendrils from the other side of the hallway. ‘Some kind of familiar. Antonio wouldn’t give me the chance to hack something again’ He thought as he knew familiars are too personal to oneself to hack the link. The tendril closest to Nicholas opened  its eye. The two eyes made contact. The warm, brown ones and the cold, red ones. For seemingly an eternity, the two stared at each other until a voice broke the silence. “Destroy the Light!”

Nicholas turned to Antonio in shock of how he got there already before he narrowly dodged a tendril which was aimed at his face. “What kind of familiar is that?” Nicholas asked, trying to scoop up info.

“A familiar of the highest grade. You see each of its eyes? Each of them are from a different magical creature. Surely you know of the Law of Contagion?” Antonio said proudly.

“Yes. I always did have issues with it. Things which have once been in contact with each other continue to act on each other at a distance after the physical contact has been severed. Usually used for Voodoo but in this ….case” Nicholas’s eyes widened in shock as he dodged another tendril.

Magnus knew what it meant. “That means that …..he can channel each of the individual creatures’ magic and abilities. More specifically, his familiar can. The familiar is capable of hundreds of different magics?!”

“Yes. I’m virtually omnipotent compared to you” Antonio says, assured of his victory. He had activated the  Geass of Revelmant. It was a pact with oneself which allowed one to grow stronger if they reveal a technique of their own. With his virtually infinite supply of mana and magics -combined with his strength from the Geass, losing was impossible.

“Well, You’ve impressed me greatly…little brother” Nicholas says faintly smiling at memories of a better time before having to dodge the tendrils once more. Where the tendrils had  hit turned to stone.

“You are not my brother! Not ever since you loved that stain!” Antonio said as Yami felt his anger and snarled along with his master.

@peepso_user_189(XavthePerson)
I love it sooooooo much! You should get a book deal lol
1 year ago 1 year ago