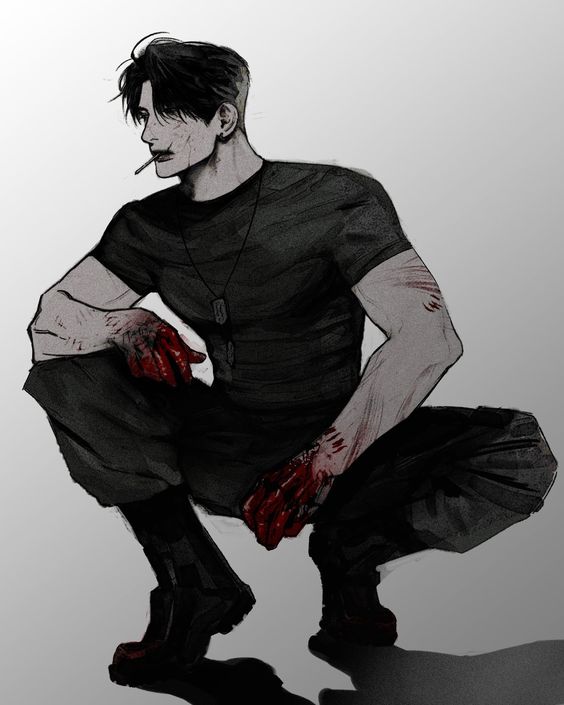 Pronouns: His He Him

While they can’t be killed by sunlight unlike actual vampires, their eyes and skin might be very sensitive to it.

Supernatural hunters are a match in hunting down vampires.

Backstory:
Quinn Lucile Raymond as simple man with a serious goal, to cure those with his diease. Quinn had cancer and instead of stopping his job, his WORK..he went on to try his best and find a cure. he had been for 11 whole years, getting sicker and sicker. He coughed violently, ached in pain, hacked up blood and in some cases passed out. But he just kept on working himself, mentally and physically doing his damndest to keep  his body from giving up on him, Everyone worked against him but he kept on going, no one could stop him anyway. But one day everything would change, both him and his body. One day during a trip back home on a quiet New York night he heard some noise.

“GET. THE HELL. OFF!”
Followed by the sound of metal, sharp metal hitting something and then a hiss, something like a snake. He hide before taking a peek, and there was some girl with a sword and green glowing eyes. She had the sword pierced through what Quinn thought was a normal male soon to be proved wrong by it’s monstrous appearance. After the girl quickly left, Quinn decided to try and help what he thought was normal man…And needless to say he frightened immensely falling back but, something told him this was the method to curing cancer, hell any disease. So? He took the body to his empty lab and did what any man like him would do, EXPERIMENT. He did so for hours and hours finding out so much before…getting a idea which he had 0 idea of whether it would work. He then took blood from the dead vampire into a needle and pressed it against his vein, injecting himself with it. Nothing had happened for a couple of hours, before he then fell to the floor writhing in pure agony and yelling, the pain was to much and he wanted to die right then and there, reach for a scalpel, ready to end it before..he passed out once more.

Extra Info:
He wished to meet a live vampire one day (142, think we could maybe make that happen?)
He has said to really like sweet and minty flavors
He can lift up to 2 Tons