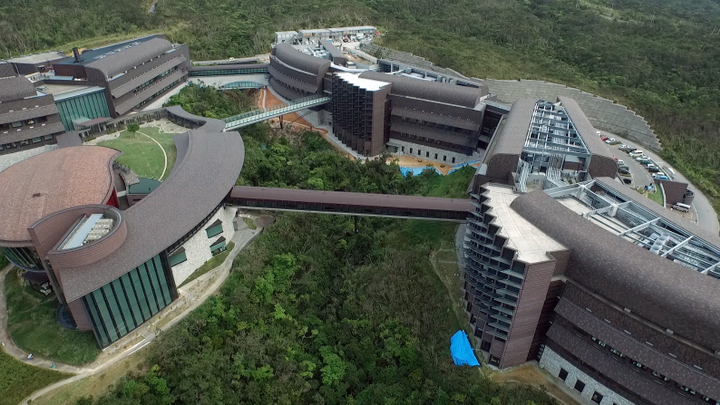 Deep in a research facility for a military corporation, in Okinawa, Japan;  research is being conducted for  special weapons that can harness energy and use it for offense. Little do they know, they are about to come across an obstacle they never could’ve prepared for..

“Man these 12 hr shifts are no joke, but I think we’ve finally figured out how to focus plasma in one focused burst” Miss Akure, the lead researcher.

” Yes, but what type of weapon could handle such power?” said another researcher.

“Adamantine and Ebonite are the only metals that could withstand harnessing that much concentrated plasma” said Miss Akure as she pointed to a computer screen that had a layout of a very unique looking sword design.

“We’re very close, but lets call it a day, and we’ll pick back up on monday.”

The researchers left the room and activated the security system. Just moments after the researchers leave the premises, a young woman appearing to be in her mid 20s is standing on top of the roof of the research facility. She had a very fit, yet voluptuous physique; and wore a yellow tank top that exposed her midriff as well as her ample cleavage, dark jeans that clung to her thighs, boots, and a fitted black blazer jacket that hugged her body. She also wore glasses which gave her a very sophisticated look. 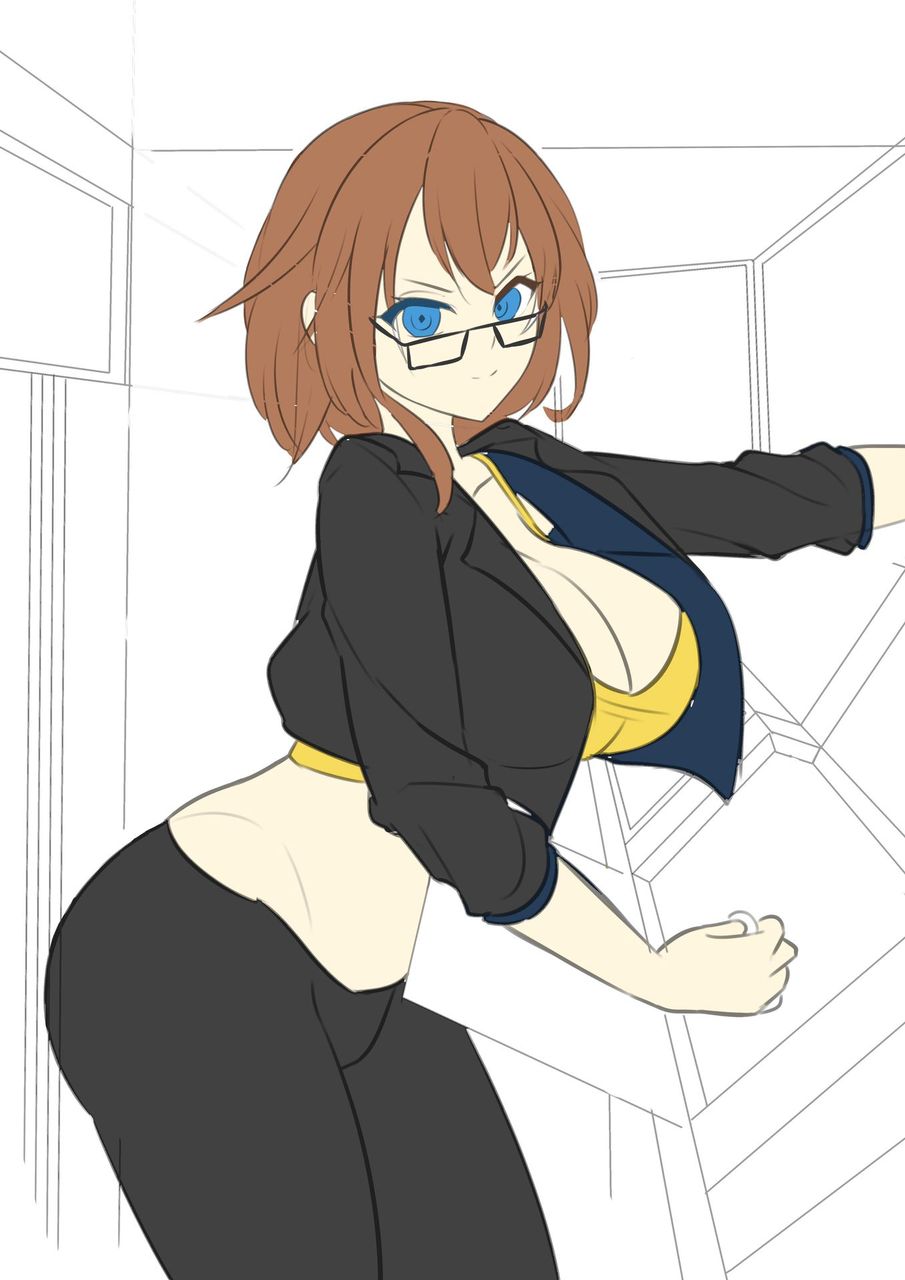 The woman pulled out a laptop from her bag, and hacked into the research facilities security system.. The laptop displayed the feed from the security cameras as well as codes that are used to enter different areas of the facility.

“Seriously? I expected better security from such a large research facility. This will be a piece of cake.” said the woman as she inserted a flash drive into her laptop. “The main guard tower is located in the east sector. I’ll have to take care of that first..”

“Another boring night it seems, not much going on in the east sector; better check camera feed from the west.” says the security guard in the guard tower, but before he can switch camera views, all power to the screens suddenly switched off.  ” What the hell? what happened, a power outage?” Before he could really check to see what was going on, the door opens and he is immediately met with a kick to the chest by the young woman.

“Surprise, bonehead. I’m relieving you of your duties.” she laughed. The guard got up and tried to restrain the woman, but she simply grabbed his arm and flipped him back to the ground causing his walkie talkie to fall off. The guard attempted to reach for it, but before he could do so, the woman stepped on it rendering it useless.

“Hmph, I think not, pal.” she said. The guard pulled out a taser, and lunged toward the woman, but she caught his wrist with ease with one hand on her hip. “Sweet dreams, nimwit” she said with a smirk,  as she forced him to tase himself for an extended period of time. The guard dropped to the floor unconscious and drooling.

The woman walked over to the monitors, and took out a disk from her inner pocket, in the inside of her jacket lining. Once she inserted the disk in the computer, the monitors displayed footage from the previous day, which would make it appear that she was never there. “Yes, Now to find the main lab.” she said as she bolted out of the tower. She approached the entrance to the west sector of the facility, and inserted her flash drive into the module at the entrance. She then entered a code which allowed the door to open. “Hm, it should be somewhere around here..” She quickly dashed across a connecting bridge, that let her into an area that had another locked door. She entered another code, which allowed her access to the main lab. “Aah, and here it is.”

She gave the computer lab a quick look, and headed straight for the main computer.  She inserted her flash drive, and immediately gained access and started to steal files of the secret weapons that were being developed.. “Interesting, A sword that can harness energy? Now that’s badass. Too bad it’s mine now. You fools won’t be needing this technology anymore.” she laughed, as she downloaded every single file onto her flashdrive. She ejected the drive, and took out another disc from her inner jacket pocket, which contained a very dangerous computer virus that wipes out all memory. She inserted the disc into the main computer, instantly uploading the virus.

“Now that the virus is uploaded, I just need to add a few more finishing touches.” She opens up one of the computer panels, resting it on her toned belly, and begins ripping out wires and hardware at all the panels.  She went over to every panel, and quickly ripped them out as her jacket flew open in the commotion, and her breasts jiggled from her pulling apart computer parts. Computer screens started to go blank one by one, as she completely trashed the lab.. Sparks bursted from the damaged computer panels, as she looked around at all of the destruction she had caused. ” HaHaHaHaHaHaHa! My work here is done. This was all too easy!”  She laughed.  “You’ve outdone yourself this time, Jaakuna.” She said, praising herself. She quickly ran out of the lab, and escaped with the files and drove off in her bright red camero..

The following monday, the researchers were met with horrible news. As they enter the lab, they looked around at the completely ruined lab.

“Oh my god, who could’ve done this?” said one of the researchers.

” I-I don’t know, but luckily I prepared an emergency backup should the main computers get destroyed. said the Miss Akure.” She pulls out the hidden backup storage unit, from the main computer and attaches it to another computer.

“I-I don’t believe it.. Everything’s been completely wiped out, there’s nothing on here”. She said shocked. “Whoever did this, knew exactly what they were doing. This kind of technology in the wrong hands will be devastating”..

Later, Jaakuna was at her home, and uploaded the data she stole onto her laptop. “Look at this, I wish I could see the looks on their faces right now, knowing that there precious technology is gone forever Muhahahahahaha!..” She leaned back in her chair confidently with her breasts up, as she placed her hand on her belly, laughing a very evil victorious laugh..

The Mystic Chronomancer – Backstory (Part One)

Born to Heimdall and Idun, a beautiful baby girl by the name of Isha Heimdalldottir was gifted out of generosity from Freya. Isha grew up with Thor and Loki, the three being inseparable bestfriends who would get in trouble aswell as have fun, nonetheless creating memories. Soon the fun came to a halt when the Frost […]

The Association of Super Beings and Extraordinary Humans: Chapter 7

My first day went pretty well don’t you think? I’d already been accepted and took down a villain that not even someone like Tyler could and he’s got years upon years worth of experience. He’s good at what he does honestly and most of that involves leading us. So when I got a call from […]

Chapter one: writing your life “Ugh” you moan as you crumble your paper and you aim for the trash bin, but like all the others they have collected on your floor. You hold your head in your hands as you loan in irritation “Why won’t anything good go onto paper these days?” You hesitantly get […]